The Legend of Tree House

Where there is a prairie far from the city. There have a gradually withered old tree, even the wooden house on the tree seems so damaged.

One day, an elf found the tree when he was doing his duty as inspection around the prairie. Then the elf asked the tree, “why the other plants and grassland were so fresh and green but only you look so withered?”

The tree uses its heavy tone slowly replied the elf, “what I need is not only the rich resources of nature, dream flourish my leaves, inspiration sturdy my body. Since the city established, I strung out. Because no one comes to this remote grassland again, and I can’t feel any of man’s eternal dreams anymore.”

The elf said “Nope. I saw people picnic nearby half a year ago. How like you said no one comes?”

Tree and then slowly tell Elf, “Elf so long to come to, you never knows just how fast the world improved? The people here complain how today’s society of pressure, and no longer as in the past before the young man scream out loud about his great dream, but now I encountered those human’s dream have no longer existed.”

Elf does not believe there anyone else who has no dream. Besides Elf’s own responsibility to ensure the health of nature all is well, so the elf bet that the world still exists those eternal dreams of guys. Then the responsibility falls on elf to find those people, and reproduce the flourishing trees in the past!

Elf immediately flies to the city. When elf flies over a house in the downtown. Through the window he saw a girl concentrate on drawing, her draw was so beautiful. So the elf decides to stay and see whether the girl will be one of them. Finally, in a few days under observation, the elf found this girl’s body not very healthy and easily get sick, between work and painting often tired herself, she still won’t miss the opportunity to draw, and the more the better-drawing skill. The elf felt touched that she insist on her own dream. Elf marked on this girl, then look for other people.

Elf flew to the city. In a small park, he found a girl jumping around and waving a stick like she just acting in her own world. Elf very curious about her act, so the elf decides to stay and observation on her. Unexpectedly, the elf found this girl love to imagine, seem her drawing skill and literary talent were not good. She all the time is in imagination, even she knows she lives in the city was can’t rely on imagine all the time in the future, people around her with a strange viewpoint but she still won’t give up her imagine and act.

Elf flies around here and there, complaining is that so few people have dreams? Not enough! collect more! Just only two people brought to the grassland, sure the tree will ridicule on him. So elf flies around the city, unknowingly he flies to a small town outside the city. Then he saw a girl typing a novel on a computer in the net cafe, he felt something wrong and decided to observe her. Between the observation, the elf finally came to understand that she does not like those two before are more affluent. This girl works day and night, but also to support the family income. She almost has no free time, relatively little painting and writing, but difficulties have never wavered in her childhood dream. By given the opportunity and extra time, she will do her best to play, even how difficult life affects her. The elf felt he really want to help her dream come true, and she influence the elf’s determination that must rescue the tree become flourish again.

A few days later, the elf brought those girls to the grassland. The elf told them about the tree and dream. After listening to the elf, those girls do not dislike the withered tree and the damaged wooden house, But very happy to know each other, and unanimously determined to make the wooden house repaired. Then they set the tree as their dream place. Writing, painting, and play endless imagine together in the future. The elf determined to stay and continue to look for more dreamers, to help the tree regain its past flourish and light!

This site uses Akismet to reduce spam. Learn how your comment data is processed. 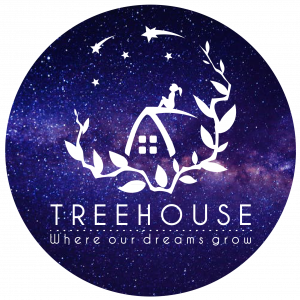 The founder of TREEHOUSE since 2013.

Slogan : Where our dream grows.